Cultural Properties in the Vicinity

Within the Shurijo Castle Park, there are numerous historical buildings and sites that have been passed down from the bygone era, some as far back as the dynasty period. 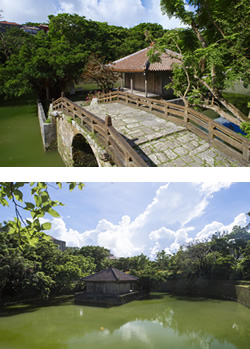 The pond in front of Enkakuji is called Enkanchi, and the structure in the middle of the pond with the red roof tiles is Benzaitendo.

Enkanchi is a manmade pond constructed in 1502, designed so that spring water and rainwater from Shurijo Castle and Enkakuji flowed here. Water that overflows from the pond collects at Ryutan, a pond located adjacent to it. Enkanchi was destroyed in the Battle of Okinawa but was restored in 1968. The depth of the pond is about three meters.

Benzaitendo enshrined the goddess Benzaiten, a deity that watched over safe voyages at sea. The structure was initially built to house the Hosatuzokyo Buddhist scriptures gifted by a Korean king in 1502, but in 1609, it was destroyed in the invasion by Satsuma. It was restored in 1629 and an image of Benzaiten which was at Enkakuji was enshrined here, but it later was ruined and a new statue was brought in 1685 from Satsuma. This too, was destroyed in the Battle of Okinawa but was restored in 1968.

The bridge that connects to Benzaitendo is called Tennyobashi, which has the characteristics of Dahaikyo bridges from southern China. The stone railings are engraved with designs of lotuses.

The arched bridge over the waterway between Enkanchi and Ryutan is called the Ryuenkyo, and it is estimated that this bridge was built around the same time as the Tennyobashi. 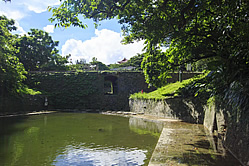 Ryutan is a manmade pond constructed in 1427.

According to the oldest epigraph in Okinawa that stood in this area, the Ankokuzan Jukabokuki, an official named Kaiki traveled to China and studied landscape gardening and returned to build the Ryutan pond.

Inscriptions on the monument stated, “Ryutan was made on Ankokuzan, where fragrant trees and flowers were planted here so that all people can gather to enjoy it, and the pond is an eternal symbol of peace.” From the inscriptions, we can see that the common people in that period came to enjoy the scenic beauty of the pond and its surroundings. Banquets with entertainment on boats were also held here to welcome the investiture envoys, or the Sapposhi, sent by Chinese emperors.

From Ryutan and the adjacent Enkanchi ponds, there is a steep terrain that is covered with vegetation which extends towards Shurijo Castle. This was commonly called Hantan-yama, and before the war, it was densely covered with tall Akagi or bishop wood that were over ten meters tall. 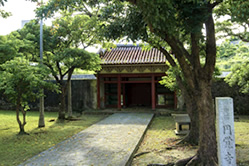 In the past, there were many Buddhist temples, Udun (mausoleums and tombs for the monarchy and officials) and other structures in the vicinity of Shurijo Castle. There were stone walls that surrounded the buildings and there was a dense growth of vegetation in the area, adding to the elegant atmosphere of a royal capital. Among the temples, the Enkakuji was a representative structure.

The temple was constructed in 1494 as the head temple for the Rinzai Buddhist sect in Okinawa, and was the family temple for the kings of the Second Sho Shi Dynasty. The temple was built in the style of Shichidogaran of the Zen Buddhism sect where a number of buildings were built within the compound.

Among them, the Butsuden or Buddha hall had the tastes and designs unique to Ryukyuan architecture, and at the center of the Butsuden inside the structure was an enshrined statue of Buddha with decorations. A total of nine structures including the Somon, Sanmon, and the Butsuden were formerly designated as national treasures in 1933, but they were all destroyed in the Battle of Okinawa.

Later, from 1968 and onward, restoration work proceeded and the present Somon, the stone walls on both sides, the Migiwakimon gate, and Hojochi pond were restored. The Hojobashi bridge that crosses the pond is the original structure from long ago and is a nationally designated Important Cultural Property. 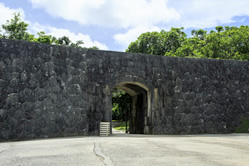 This gate was only used to transport materials when construction work was conducted at Shurijo Castle.

Normally, stones were piled and the gate was closed off, but only during construction projects, which occurred about once every few years, the stones were removed so that the gate could be used.

Presently, it is used as the wheelchair access route. 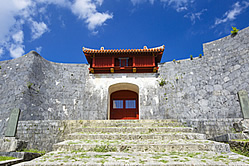 The Keiseimon was the eastern gate and the back gate of the Shurijo Castle. This was a gate in the outer ward and it was also called the Suetsugi Ujo.

There were two stone monuments erected on both sides of this gate with an inscription describing how the Keiseimon was built in 1544, in preparation and protection against the Wakou pirates who were a fierce threat at the time. 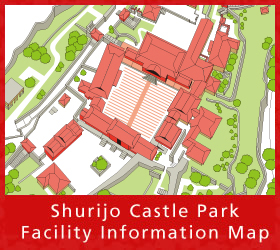