Most people would probably imagine a colorful passionate flower when thinking of the Hibiscus.
The Hibiscus is one of the flowers that represents and contributes to the enhancement of the tropical image due to the fact that it comes into bloom almost every year and has a great ornamental value in Okinawa. It is also widely used in gardens, along the streets, and in parks since it is easy to grow outdoors.

However, it is not well known that the Hibiscus is said to have over 5,000 kinds of garden species, and that there are types of Hibiscus that are used as fiber and food. 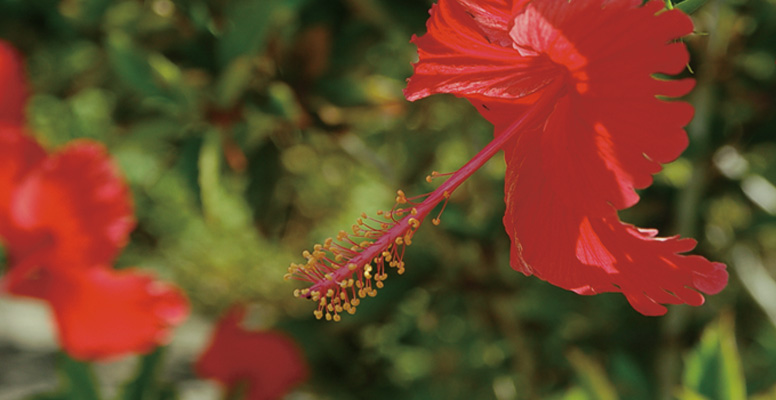 What is Hibiscus mutabilis?

Hibiscusis categorized under Malvaceae, and is found throughout the world centering in the tropical and subtropical regions including some temperate regions. There are approximately 250 species of foundation stock that are categorized under Hibiscus. There are also various types of Hibiscus such as annual, biennial and perennial herbaceous plants as well as arboreous shrubs and trees.

Shape of the flower

The flower, which grows from the base of the leaf (leaf axil), is a hermaphrodite flower with both stamen and pistil in one flower. It is composed of fivecalyx and five petals , and has many stamens combined in a form of a cylinder sticking out.

Shape of the leaf

It has a single leaf that has a stipule which alternately grows on the stem. It is shaped like the palm of a hand with slits, and has either a smooth type or laciniate (jagged type) leaf margin.

The improvement of breeding of the Hibiscus is said to have started in the beginning of the 20th century at an agricultural experiment station. It seems that in the beginning, species that grew naturally in Hawaii were crossed. The majority of these flowers were small and simple, and full of wildness, which is unique to foundation stocks. Species that represents these are Hibiscus arnottianus and Hibiscus kokio.

It is said that later on, species such as Hibiscus rosa-sinensis and Hibiscus schizoepetalus were introduced as pollen parents and greatly contributed to breed improvement.

The species name comes from Mr. George . A . Walker（1799 - 1868） , a botanist and collector from Scotland and chairman of the board of Glasgow Botanic Gardens. This species is commonly called “Wilder’s White”.
This species can grow to be about 29.5 ft. and has dark green, oval shaped leaves that are 6-8 inches long with distinct cortex and serration. The flower has white petals with a diameter of approximately 4 inches and light pink veins, and is a little reddish. It has a slight scent.

Its place of origin is Hawaii and it grows to be 19.7 feet. This flower, which is 3-4 inches, has reddish orange, red, and in rare cases, yellow and orange spots. A distinctive feature of this flower is that the filament bends backwards and differs depending on the location. In order to form a more attractive appearance, it is used for breeding with Hibiscus rosa-sinensis. It is said to be on the verge of extinction in natural habitats.

It is still not known for certain where this flower came from or how it came to Okinawa. In connection with the location where it was found in 1753, Carl von Linné named it “Rosa-sinensis” meaning “Rose of China” and introduced it into Europe. This flower comes in two types, a red double blossom and a red single blossom. It is said that after more than 200 years, the single red blossom flower was finally designated as a species presumed to be that from somewhere around the east coast of Africa. A long debate in Okinawa among botanists was whether to use the red double blossom or the red single blossom for breeding, so various conjectures were made.
It is one of the flowering trees that represents Okinawa, strong and fast growing and sturdy for the strong wind in Okinawa. Its branches stretch out straight, and the tree grows to be about 10 feet tall. For many years it has been frequently used in graveyards and for offerings at family tombs. Therefore, it is sometimes called “After Ages Flower” (Gusohbana). It is also often used as hedges around residences. There apparently was also a time when it was valued for various purposes such as for feeding goats and making shampoo.

Red flowers hang down from the long branches and the appearance of it waving in the breeze is cool-looking,. From its shape, it is compared to wind-bell or lamp. Its English name is Japanese Lantern and is called Christensen ceropegia in China.
It is an evergreen shrub, originally from Zanzibar Island of East Africa, and grows to be about 10 feet high. Its branches and leaves stretch diagonally upward, and a few flowers with a diameter of about 4 inches bloom downwards on the tip of the branch. The petals are deeply incised and largely curved towards the long flower stalk that droops down, making it look spherical from far away. The color of the flower is dark red at the base of the petal, and has white and pink stripes from the center to the tip. The flower’s style sticks out long from between the petals, and the tip portion called stigma splits into five stamens. We often hear that it is hardly seen these days, but we hope it is utilized more as garden and greening trees.

It is said that foundation stocks used for the improvement of breeding in Hawaii were mainly Hibiscus storckii originating in Fiji. In addition to this, Hibiscus rosa-sinensis and Hibiscus schizoepetalus which grow naturally in Hawaii, were also used.. It is also said that several species that are able to be crossbreed with these grow naturally among the Mascarene Islands such as Mauritius.

It was crossed in the early ages among other species of Hibiscus, and is a collective term for species based on the Hawaiian type.

Although many of them are medium or small sized and tend to not change much in color, their growth is full of vigor and multiflorous, and its flowers bloom in attractive refreshing colors such as red, pink, yellow and cream. Many of the leaves are deeply incised, and the branches grow narrow and long.

It is a collective term for species crossed on the basis of Hibiscus schizoepetalus.

Since it is descended from Hibiscus schizoepetalus, there are many flowers that have deeply incised petals and that bloom in a frill-like form. The flower color is mainly reddish. Major species seen in Okinawa include “Archery”, which casually blooms with its flower neck slightly dropping down and “Pink butterfly”, which has a rather small flower. In general, Coral type is strong and easy to grow, which is also appealing.

The most major types among the species of Hibiscus.

Since selective breeding was done in Hawaii for most of them, they are called Hawaiian Hibiscus This type features large flowers and gorgeousness and rich coloring. The flowers also have wide petals, look circular since there is hardly any space between the petals, and have rounded leaves. Enthusiasm of breeding is currently dying down in Hawaii, and instead, it appears that new species are being created in locations such as Florida of the U.S. and Queensland and New South Wales of Australia.