What makes a private house of Okinawa unique 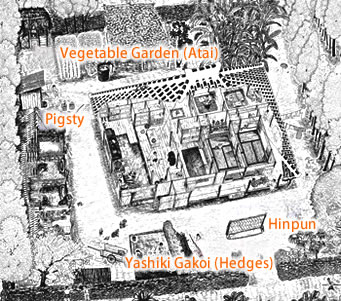 “Hinpun” which is not only for privacy but also for protecting from evil, “Enclosure around the house” which acts as a windbreak and fire prevention. At the same time, it creates beautiful scenery. There is also a pig pen with a roof called “Okinawan recycling-oriented house” which is full of eco sensation. The life-style full of ideas in those days can be seen from the private houses of Okinawa. 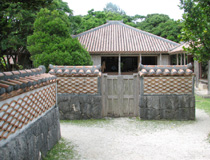 Enclosure around the house 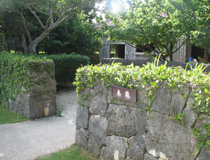 The house is surrounded by a barrier made of stones, trees and bamboo. Because hedges are said to be effective protection against wind and fire, trees such as Garcinia subelliptica, Podocarpus and Ficus microcarpa were planted. Also, shrubs such as Murraya paniculata, Buxus microphylla var. japonica and Hibiscus rosa-sinensis were planted for their beautiful flowers.
There are various stone walls that differ in how they are stacked and what they are made from such as Nozura-zumi, Nuno-zumi and Aikata-zumi.

What is Okinawan recycling-oriented lifestyle? 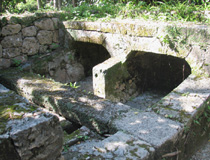 An Okinawan recycling-oriented house features a “pig pen with a roof (Yahfuhru)” on the northern corner. This was used not only as animal housing but also as a toilet.
When a person passes stool in the stone enclosure, the excrement is carried through a rectangular hole and becomes feed for pigs.
Since the leaves of Hibiscus tiliaceus were used as toilet paper, Hibiscus tiliaceus were planted near the pig pen. 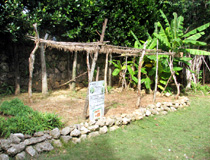 ・It is said that the custom of China spread to Okinawa.
・Vegetables such as Japanese radishes and carrots as well as seedlings of potatoes for livestock feed were grown in the kitchen garden (Atai) within the premises of the homestead.
・Recycling-oriented house features a lifestyle that utilizes the cycle of the pig pen with a roof → toilet → leaf of Hibiscus tiliaceus → feed for pig. *It was banned in the Meiji period due to hygienic reasons.
・There is a restroom in the pig pen of the Native Village.