About the Insectivorous Plant

Brocchinia has many leaves rolled in forming a cylinder which becomes yellowish green to stand out in order to attract insects. It captures and digests the insects in water collected inside the leaves.[3]

How do they capture their preys?

There are mainly three types of known “traps” to capture insects.

A part of the leaf is shaped like a bag or cylinder which is just like a pitfall. Genera such as Genus Nepenthes, Sarracenia, Darlingtonia, Heliamphora and Cephalotus have this type of structure.

There are many hairs on the surface of the leaf which produces sticky substance which acts like an adhesive sheet. Genera such as Drosera and Pinguicula have this type of structure.

Type that senses the movement of insects and reacts by closing its leaves or sucking in the insects like a dropper. Genera such as Dionaea muscipula and Utricularia have this type of structure.

Types of insectivorous plants and their distributions 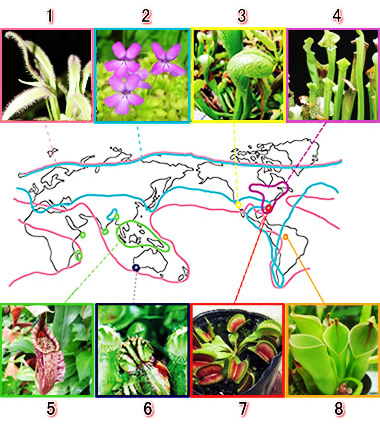