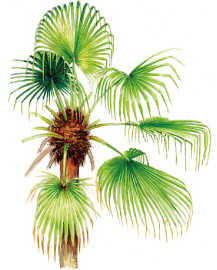 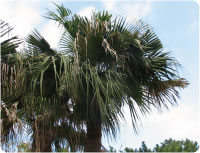 Location within the park

Livistona chinensis is found from the southern part of Kyushu to southern China and Taiwan via the Ryukyu Islands. It is a tall tree of 50 feet with a single trunk that stands upright, leaves with a narrow palmately cleft, and lobes that further split in two and hang down. Its spadix is long with yellow flowers that bloom closely to each other between April and May and have a unique scent. Its fruit is oval and ripens between September and November at which time it becomes dark blue. Its seeds are white and round. It is a variant type of the elementary species Livistona chinensis. Since it was believed to be a sacred tree from where god would climb down to earth, it is often seen at sacred sites in Okinawa which are named such as “Kuba Utaki” and “Kubohnu Utaki”.

About the sacred tree

It is a sacred tree grown at sacred sites in Okinawa, and is called “Kuba Utaki” or “Kupohnu Utaki”. Also, it is utilized among the young in Okinawa. In the old times, the leaf of Livistona chinensis was used to make well buckets for drawing water, and presently, it is used to make round fans and woven hats for fishermen to wear.
This tree of Livistona chinensis is referred to as the tree of “Ajimasa” in the Records of Ancient Matters, and is also said to have been valued by the Yamato Dynasty. It is also said that the trees of Awa Province and Awaji-shima Island became a tribute. 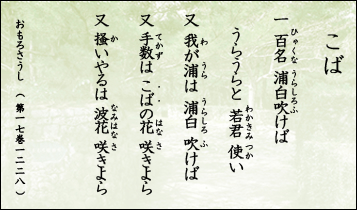